How I Found Patricia Highsmith in Paris 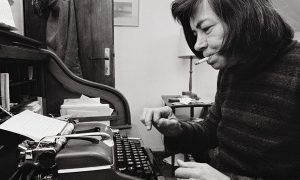 I had never heard of Patricia Highsmith. But I saw her book Carol (first published in 1952 as The Price of Salt under the pseudonym Claire Morgan) on a bookshelf in Paris last week.

The bookshelf belonged to the host of the short term rental at which I was staying within the shadow of the Centre Pompidou. Thinking I might have some time to read this particular day, I put it in my backpack and left for the day.

When I returned to the flat late that same night, the door was ajar and I quickly discovered that a thief or thieves had ransacked the place, taking my laptop and iPad. After contacting the host, I trudged down Rue Beaubourg at midnight to a hotel to spend the night.

I had forgotten to take Carol and Patricia out of my backpack, so in a sense I had thieved along with the thieves.

I have since been reading Carol and find Highsmith’s writing quite remarkable. For me, it’s similar to “discovering” Carson McCullers – who wrote The Heart Is a Lonely Hunter when she was 23, which was quickly followed by Reflections in a Golden Eye, later adapted for the screen in a movie starring Elizabeth Taylor and Marlon Brando, directed by John Huston. I am similarly delighted to “discover” Highsmith.

Highsmith wrote Strangers on a Train, made into a Hitchcock film (1951), and also The Talented Mr. Ripley (and several more Ripley novels) which was adapted for a 1999 film starring Matt Damon as Tom Ripley, Jude Law as Dickie Greenleaf, Gwyneth Paltrow as Marge Sherwood, Cate Blanchett as Meredith Logue, and Philip Seymour Hoffman as Freddie Miles.

Highsmith is sometimes considered a “lesbian” writer, or a writer of lesbian fiction, an epithet she disliked, and remarked that Carol was unlike other so-called lesbians of the era in that it had a relatively happy ending. No overdoses, murders, suicides or other traumas for the lesbian heroines. You can be a lesbian and also be happy.

I am only half way through Carol, and am enjoying it immensely. It, too, was made into a film only a few years ago, starring Cate Blanchett and Rooney Mara and garnered six Oscar nominations.

I will be reading more Highsmith, for sure.