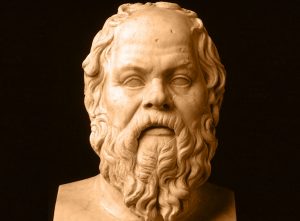 Wait! Everyone, it would appear, is blessed with knowledge and wisdom these days. We all seems to know it all.

Is there anyone, in some small enclave of solitude and thoughtfulness, who would confess (privately, of course, and only to a parish priest bound by the confessional to confidentiality) that he or she is affected by or in possession of nuance, by other possible outcomes, by alternative approaches, by post-conventional thinking, or, God forbid, is in total ignorance of certain issues about which everyone seems to be authorities?

No, we live in a culture of omniscience, and it is very difficult right now for the few souls who have reservations about erasing history and tearing down monuments; who lament the loss of gray-area thinking; and who are alarmed by the authoritarian tone so many have adopted these days. Is there anyone who struggles with bandwagons, the mob mentality and the herd instinct?

I’m reading a marvelous little book right now about Socrates. It’s written by Paul Johnson, an academic historian and philosopher, past don at Oxford. You remember that it was Socrates who famously said that an unexamined life is not worth living. Socrates quest was to know himself.

Once, a friend went to the Oracle of Delphi and asked the oracle if there was anyone who was wiser than Socrates, and the oracle answering, “No one.”

Socrates was surprised to hear this report when it came to him. Rather than being flattered, he was puzzled.

Johnson writes, “He eventually concluded that what the Oracle meant was that his wisdom consisted in knowing his own ignorance.”

Ah, do we know our own ignorance? For Socrates, knowing himself was a lifelong quest. He was suspicious of the obvious, and he could demonstrate that “nearly always, the obvious was not true and that the truth is very rarely obvious.”

This is why Socrates was not only hostile to the “right answer,” but also to the very idea that there is a right answer.

Might I suggest that we endeavour to be more Socratic? Might we begin to ask more questions, rather than announcing the answers?

By profession, I am used to inviting people to emulate Jesus Christ. Now, I suggest we emulate Socrates. In any case, they both drank from the same cup of misunderstanding and died as a result of this misunderstanding. There are other similarities too: Both had disciples; both were sentenced by the current government; and neither one of them wrote anything down.

I suggest we be more like Socrates and Jesus and less like the crowds who clamoured for their executions.

Let’s ask questions, and what we learn, let’s keep to ourselves.

Second Quarter 2020: Suggestions from What I Read