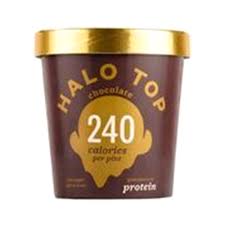 Halo Top Creamery got its start in 2012 when former attorney, Justin Woolverton decided that he needed to find a lower calorie alternative to traditional ice cream. Another attorney, Doug Boulton joined him in the quest.

Today, Halo Top lite ice cream is sold in pints around the world. According to Wikipedia, “In July 2017, [it] became the best-selling ice cream pint at grocery stores in the United States, surpassing in popularity the Ben & Jerry’s and Häagen-Dazs brands, which previously held that distinction for years.”

One of their TV adverts features a plus-size gal dancing in a way that leaves no one misunderstanding: This girl is a large. No problem with that. Far from it. In fact, the text that accompanies her dancing goes like this: