The Count of Chartres 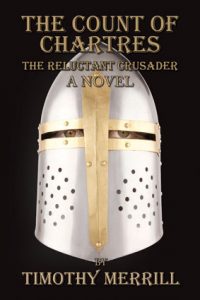 The Reluctant Crusader is a story of courage, bravery and devotion to an ideal. Count Stefan of Chartres (and Blois) is one of the wealthiest men in France in the late 11th-century. When Pope Urban II organizes a “crusade” to the Holy Land, Stefan is reluctant to go. But—his resistance weakened by the hectoring of his wife, Adela, the daughter of William the Conqueror—he goes anyway. En route, he meets the Emperor Alexius and his daughter Anna. Meanwhile, Peter the Monk organizes a crusade of the people or peasants. They set out for the Holy Land in advance of the crusading nobles. Among them are Adelaide Bartholomew and her sister, Lettie, and daughter, Clare. They meet two relic sellers who are from Provence, like themselves. Their pilgrimage is a difficult one. The nobles and the peasants meet near Antioch, and from that point the stories intermingle. Stefan’s marriage is compromised by both the behavior of his wife and Philip, the king of France, and Stefan’s own troubled heart. Adelaide’s biggest concern is the welfare of her daughter. A spell-binding story built on actual historical primary sources, The Count of Chartres: The Reluctant Crusader is a page-turning saga that will hold in thrall both history and fiction lovers.