The Moviegoer, by Walker Percy 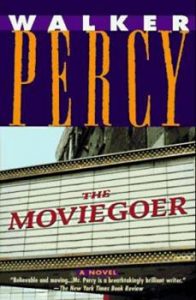 Finished reading The Moviegoer, a book which was not at all what I thought it would be, and for which I did not care one bit. This is two in a row that perhaps succeed brilliantly as literary works of art, but fail miserably as stories worth reading. This one, like Malcolm Lowry’s Under the Volcano, has a thin, thread of a storyline stitched through the novel, which, if culled and placed together in a linear way would occupy a mere handcloth of narrative. Instead, what we have here is a patchwork quilt of a novel in which the storyline is so light as to be almost invisible. Percy is often funny, but this first person stream of consciousness is too Falknerian or Jocycean. And perhaps the book, which is not about somebody who goes to the movies, is about the protagonist’s search for God and meaning, but the reader has to care. I absolutely didn’t care if Binx Bolling found God, found meaning … Percy didn’t make me interested in anything Bolling was saying. Most of the novel is a detour. Think of a map of Old Jerusalem. That’s how this book reads. This was Percy’s debut novel and it won a Pulitzer Prize, as did Lowry’s Under the Volcano. Draw your own conclusions.

FOURTH QUARTER 2020: Suggestions from What I Read